In addition to reminders, there is an Alert Schedule. Once the assessment is Approved, an alert schedule can evaluate the responses on the assessment and generate alerts based on response patterns. The Alert Schedule allows Organization Administrators to identify rules for when Alert Notifications should be generated, based on thresholds for question responses. Multiple questions and response thresholds can be joined together with Boolean logic as conditions of the alert. Several Alert Items can be added which will act independently of one another. The available Rule Levels in the drop-down are managed in the Settings Module by the Organization Administrators.

You can set up an alert schedule for the questionnaire by selecting Add Item. Figure 6.2.2.a depicts an example which will be described in the following. 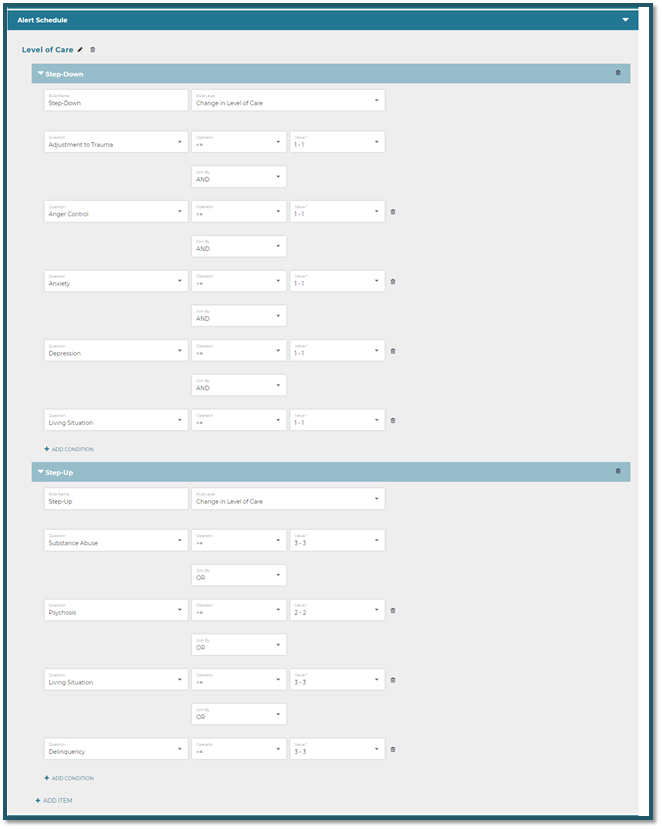 The schedule will generate an alert as soon as all conditions are met by one set of assessment responses when an assessment is Approved. The following describes the alerts which would generated by the example in Figure 6.2.2.a.

As many rules as you want can be included in a schedule. The rules are applied as soon as the assessment is Approved. Once approved, P-CIS will check the responses against the rules here in the alert schedule. If any of the rules are met based on the responses, an alert will be generated, and it will show in the notification table as well in the person's notification tab. The alert will remain until a re-assessment is performed which no longer meets the schedule’s criteria, in which case the alert will automatically resolve. The alert can also be manually resolved at any time.

Was this article helpful?
Thanks so much for your feedback!
100% of people found this helpful.
Privacy Policy